There is a mania in the air, and it goes by the name of Billie. Homeschooled prodigy Billie Eilish has captured an entire generation of music fans on a deeper level than mere trends or aesthetics. She has tapped into an energy and psyche like few others have managed. In an age of increasing existential angst and confusion, she has become the focal point for a generation in search of a pop culture saviour.

Too dark and experimental for a typical mainstream audience, and not ‘guitar’ enough to be purely punk or rock, Billie is most comfortable when free from genre. She melds the sounds of pop, indie, goth, industrial, and bass-heavy electronica with ease, creating eerie soundscapes and lyrical narratives.

This is a result of her eclectic upbringing. She recently explained to Jimmy Fallon, “I grew up listening to so much different kinds of music, old stuff and new stuff…Peggy Lee, Frank Sinatra, Tyler The Creator and Nas, I was all over the place and I think I just put it into the music”.

While impossible to pigeonhole, a key characteristic of Billie’s music is that it is as minimalistic as it is melodramatic – small on sound and delivery, big on content and ideas. With her brother FINNEAS as primary co-songwriter and producer, she deliberately eschews pop norms and expectations, and is sometimes lauded as one of the figureheads of the post-genre music world of 2019.

This refusal to conform is a major part of Billie’s appeal. Rebellion and angst are essentially prescription drugs for teens, and she represents both in excess. So how does her brand of pop music differ to any other before? Comparing with another teen megastar from a different age illustrates how the times have changed.

Earlier this year, Billie was featured in a Rolling Stone cover story. Coincidentally, this fell on the 20th anniversary of another iconic teenage popstar’s photoshoot: Britney Spears. Britney as a symbol of the pop music machine couldn’t be a further archetype from Billie Eilish. Britney’s moment in the spotlight can be summed up as bubblegum pop in pigtails, while the latter aligns more closely with the aesthetic and musical approach of artists like Nine Inch Nails or Marilyn Manson.

Significantly, 90s alt-rock icons Dave Grohl and Thom Yorke are even counted as Billie admirers. Grohl likened the fervor behind her performances as similar to Nirvana in their heyday, with Yorke even saying to her face, “You’re the only one doing anything fucking interesting nowadays”. 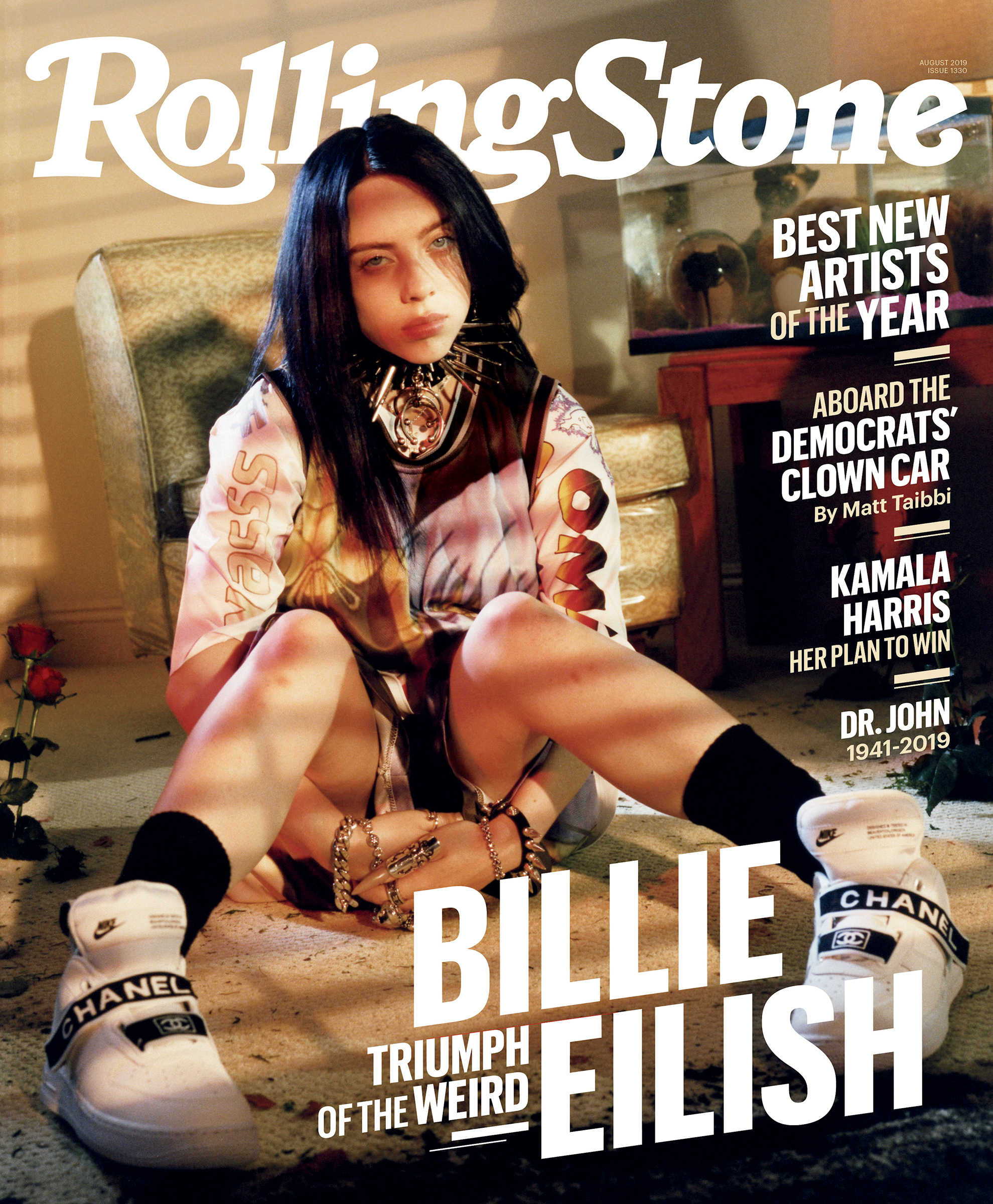 While Britney is not exactly a fair comparison, she is symbolic of a unique time in pop music history. In general, the 90s and 2000s felt more naive and optimistic, at least in the mainstream. (Perhaps a more similar parallel, for the ‘alt girl’ of the time could be said of Avril Lavigne. Yet, even Lavigne’s music was thinly veiled corporate schlock purposely designed to appeal to the skater and punk chicks).

However, it doesn’t take a PhD in sociology to notice that young people in 2019 are filled with anything but naivete and optimism.

Billie was born in 2001. She is Gen Z through and through. The world that Gen Z is inheriting is not a particularly bright one. 9/11 to them is an event in the history books, climate change is now known as a climate crisis, they live in a dystopian world where everything, including themselves, is for sale, and all they see is dysfunction and division in all pockets of society…it’s no wonder that teens these days are displaying record rates of anxiety and depression.

While singers like Britney, Christina and Avril sang about crushes, genies and baggy pants, Billie digs much deeper. Her songs are filled with lyrics referencing subjects like Lucifer, suicide and self-loathing, night terrors and sleep paralysis, Billie voices all the stresses facing young people these days, and more. She understands exactly how these kids feel, because she is one of those kids.

Billie’s lyrics capture the unease, paranoia and inner turmoil of adolescence and this resonates with her fans. As she sings on latest single “All The Good Girls Go To Hell”:

The age of feel-good, bubblegum pop has given way to a much darker and realer artistic approach. Billie has finally seized the crown to sing about the stark realities shaking the core of an entire generation.

Which goes some way in explaining her explosion in popularity. The worldview of millennials and Gen Z is strongly cynical and somehow post-postmodern. It aligns with many points of nihilism, so much so that a tongue-in-cheek phrase has been coined to describe today’s zeitgeist- ‘millenihilism‘. Other hallmarks of a typical millennial or Gen Z kid include openness regarding mental health, self-deprecating, absurd-style humour, longing for death, and just a general, pervading sense of existential ennui.

This willingness to explore the dark side of her reality is further emphasised by Billie’s visual aesthetic. For one, her videos are more than just an afterthought. They’re carefully crafted, drawing on imagery associated with tech-punk/horror-fantasy tropes to build a uniquely Billie-esque world where the line between nightmares and waking is blurred. Black tar, bleeding eyes, needles, demonic forces and fire resonate with her core audience much more than midriffs and schoolgirl skirts could ever hope to achieve.

Secondly, the other visual aspect of Billie Eilish that is just as vital to her success is her fashion. It’s punk for a new generation raised on Instagram, memes, and luxury labels. Her choices are a confronting amalgamation of Hot Topic, Hypebeast and Roy Lichtenstein, if Lichtenstein had grown up reading manga under a black light. By creating what might be traditionally considered sartorial abominations, Eilish subverts the fashion establishment, while telling her fanbase that it’s ok to just do you.

Furthermore, contrasting with the sexpot imagery employed by popstars in the past, she wields her fashion choices as a huge middle finger to industry standards, and has also been covered quite widely, a double middle finger to the sexualisation of girls in the music industry.

Of course, Billie Eilish is not the first artist to explore these ideas or express darkness in her music. However, she may very well be the first to have this widespread success (and she is actually the first Billboard No. 1 artist born in the 2000s). Her videos and songs have amassed a whopping 15 billion streams, and counting. Fresh off the back of a successful world tour, she also just announced another world stadium tour for 2020. Based on footage and reports from recent shows, the Billie energy is literally shaking the ground everywhere she goes- her Brisbane show was almost cancelled for fears of the crowd getting too out of hand.

prague you were beautiful

It is the artist’s job to reflect and critique the zeitgeist they find themselves in. As someone barely even old enough to drive, Billie Eilish is as much a product of her generation as she is now a prophet for it. She has captured something that no other artist has in recent memory. Billie Eilish delivers something special, and has her audience eating up every action and word, like a priest or saint delivering sacraments to a congregation searching for guidance and ultimately salvation.

3 thoughts on “Billie: Patron Saint of the New Millenihilism”