Throughout his turbulent career, Kanye West has pushed boundaries across all kinds of genres and subject matter. Despite the typical hip-hop machismo and borderline narcissism found in his lyrics, a surprising thread can be found stretching from his humble beginnings to today. There is a genuine grapple with faith, and a search for salvation at the heart of Kanye’s journey. With a string of successful Sunday Services behind him, and in anticipation of the Jesus Is King phase of his career, we took a numerical look through Kanye’s entire discography to discover exactly where, when and how Kanye raps about God, Jesus, and all things spiritual.

Data was collected by searching through Kanye’s eight studio albums (plus Kids See Ghosts) based on lyrics featured on Genius, the world’s biggest lyrics website and foremost authority on all things hip-hop. Lyrics were analysed using the software package R [source]. Our search queries were entered as ‘God’, ‘Jesus’, ‘Spirit’, ‘Satan’, ‘devil’, and ‘Mary’ and ‘Joseph’.

From a total of 129 tracks, we found that 58 of those tracks contain some mention of God, Jesus or other spiritual content. That’s 45% or nearly half of all of Kanye’s songs. ‘God’ had by far the highest count of mentions, which can be partially attributed to the high frequency of “Oh my God”s throughout his lyrics (as well as the track “I Am a God” on Yeezus, in which Kanye calls himself God no less than 13 times).

The three main spiritual references labelled as God, Jesus and Satan are shown below. Organised by album, the left chart shows the total number of tracks featuring those words, and the right chart show total word count for each word. 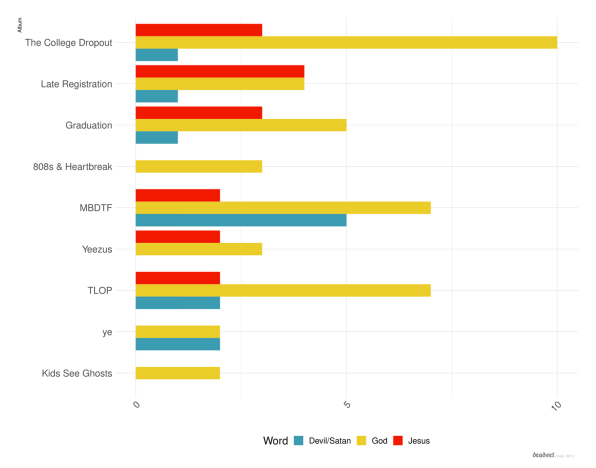 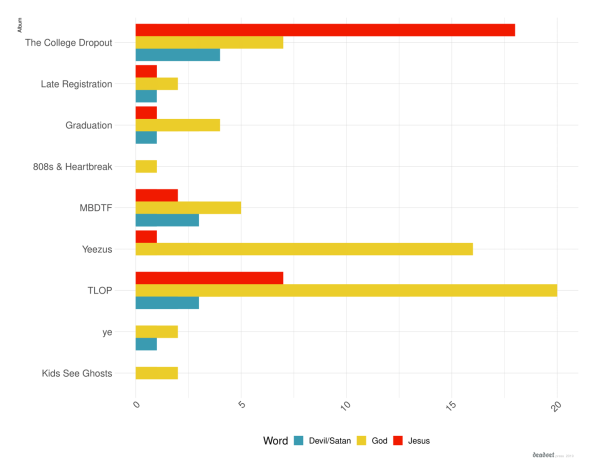 Looking in detail at the search queries used, word frequency by album is shown below: 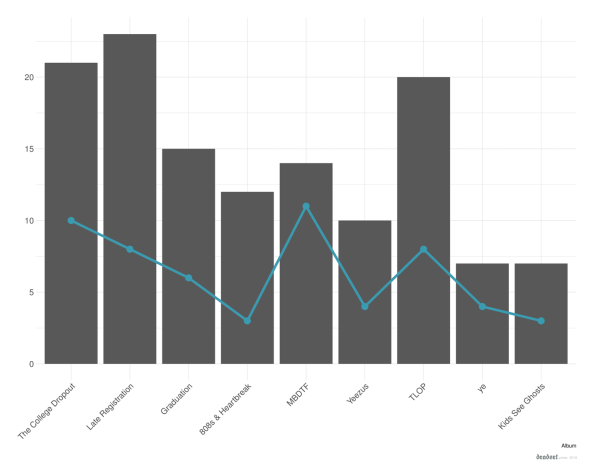 Chronological tracking of tracks with spiritual references versus tracks without 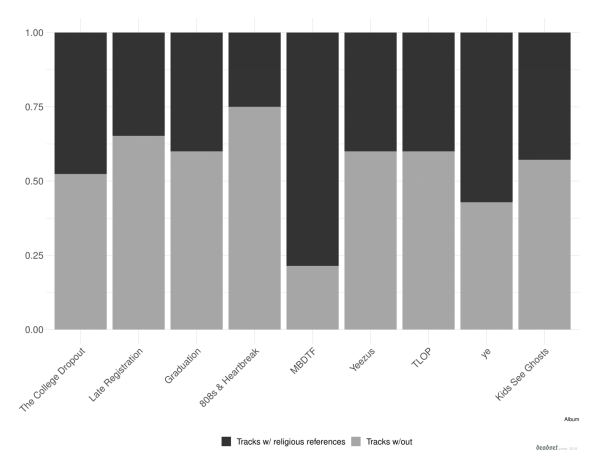 We can divide the spiritual content in Kanye’s lyrics into four main themes.

“Jesus walk with me” – KANYE AND JESUS

Seminal track “Jesus Walks” featured on The College Dropout (2004). It is Kanye’s most prominent feature of Jesus. It is also widely considered as a career-defining moment for the then up-and-coming producer-rapper from Chicago.

The song’s central theme revolves around Kanye asking Jesus to walk with him as he embarked on his career. It serves as a 3 minute manifesto with Kanye imploring Jesus to not let his feet fail. The image of walking and feet failing is also a common Biblical image involving facing trials and tests of faith.

The impact of this track on his later work is indelible. He references “Jesus Walks” in 2006 on “Big Brother”:

Then I dropped ‘Jesus Walks’ now I’m on the steeple

At this stage in his career, Kanye’s attitude towards Jesus is one of humble respect. Kanye recognises that he needs the help of the Almighty to get through this life. On “Diamonds from Sierra Leone” he also raps, “My father been said I need Jesus”, echoing the earlier line from “Jesus Walks”, “My mama used to say only Jesus can save us”.

However, as Kanye’s career took off, his reliance on Jesus saw a downturn as seen on 808s and Heartbreak. Following these dark times in his life (discussed in a later section), the mentions of Jesus and God return, but in a more negative manner. Kanye’s infamous ego began to take on a life of its own, resulting in him adopting the quasi-sacrilegious moniker of ‘Yeezus’ and writing songs like “I Am a God”.

The move away from humility on “I Am a God” is a bold statement, with Kanye straight up flexing his money and success right in Jesus’ face.

I just talked to Jesus
He said, “What up, Yeezus?”
I said, “Shit—I’m chillin’ tryna stack these millions”

As an album, Yeezus was a watershed moment for Kanye. It was an angry, abrasive record, illustrating that the initial sense of optimistic humility as seen on “Jesus Walks” had made way for another more troubled, and perhaps more realistic, depiction of modern man and his faith.

“This is a God dream” – KANYE AND GOD

On non-album track, “Clique” (2012), Kanye raps: “But I been talkin’ to God for so long/ That if you look at my life I guess he’s talkin’ back/ Fuckin’ with my clique”. Despite the explicit language, Kanye appreciates the fact that his career has been blessed.

However, his relationship with God is far more complex in the earlier stages of his career.

While on a track like “Jesus Walks”, Kanye laments “I wanna talk to God but I’m afraid ’cause we ain’t spoke in so long”, and on “Bittersweet Poetry”, he raps “God, talk to me now, this is an emergency” , a few years later, this sense of humility is all but gone. With Kanye literally equating himself to a God in the midst of an irreverent, surrealist hook.

The jump between Yeezus and The Life of Pablo is also significant. As Kanye adjusted to life as a husband and a father, newly pertinent spiritual questions arose. His ego may have inflated at an alarming rate, and Yeezus’ experimental abrasiveness divided fans, TLOP was filled with Gospel influences, and served as a portrait of a man torn between the flesh and the spirit.

Iconic track “Ultralight Beam” opens with a sample from a viral video of a young girl cursing out any demons from this house, and calling out on God. It semi-ironically sets the tone for the rest of the album. From featuring samples from pastor Kirk Franklin, to descriptions of prayer, to something as obvious as the album being a reference to Saul of Tarsus (later Paul, i.e. Pablo), an influential New Testament figure.

For this reason, TLOP by far features the most lines with Jesus or spiritual references. It may be surprising, but hidden between lines about bleached assholes and parties in LA, Kanye expresses genuine questions of faith familiar to any believer struggling with life in the 21st Century.

On “Saint Pablo”, the lines “Wonderin’ whether God’s gonna say hi” are repeated by Sampha almost as a mantra. This is a stark contrast to Kanye’s relationship with Jesus and God in the past – one in which he seemed ready to call on at any time.

In response to his escapades in the material world, Kanye seems genuinely torn. He later raps on the same track:

So the people can see my light, now it’s not just rappin’
God, I have humbled myself before the court
Drop my ego and confidence was my last resort

As Kanye seeks out the light in his life, a subtle repentant mood can be heard in the later albums, particularly on TLOP. It’s a shadow of what would become his full-fledged Sunday Services in 2019. This idea can perhaps be best summarised in track “Father Stretch My Hands Pt.1”:

I just wanna feel liberated, I-I, na-na-na
Who can I turn to?
…
Tell me who in here could relate, I-I-I
No other help I know, I stretch my hands 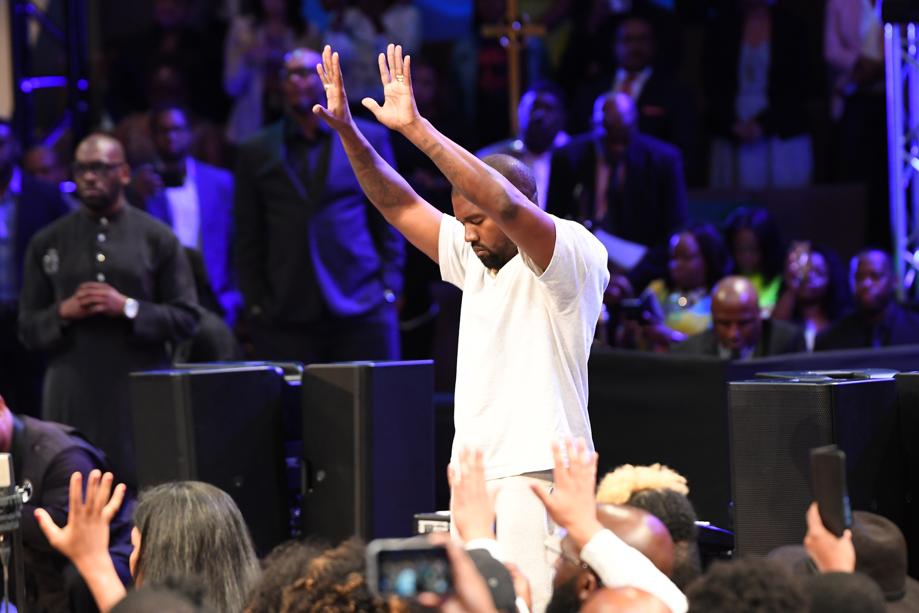 As he spoke at the Atlanta Sunday Service, September 15,  “You know the devil presents so many flashy shiny objects. I’ve seen everything that the devil could’ve shown you”. No one knows the trappings and temptations that come with celebrity and success more than Kanye West.

Sitting in the middle of his backcatalog, the modern masterpiece that is My Beautiful Dark Twisted Fantasy is less concerned with issues of heaven and salvation, and more of hell and the devils within. It featured the most references to the devil or Satan. Kanye’s early struggles with temptations of the faith were referenced early on in his career, as on “Heard ‘Em Say” (2005):

The devil is alive I feel him breathin’

One particularly striking image features on “Gorgeous” from MBDTF:

Penitentiary chances, the devil dances
And eventually answers to the call of Autumn

The next few years of trials and tribulations would reveal even more about Kanye’s relationship with himself, with his faith, and with Jesus. In the wake of the Taylor Swift VMAs drama, Kanye was faced with being a pariah in the music world. His inner demons pushed him to his limits, and some might even argue, his most creative too.

The devil as a symbol for fear and oppression also appears twice on ye (2018), his most personal exploration of personal demons and inner turmoil. He raps on “Yikes”:

“Chop up the soul Kanye” – KANYE AND SELF

Battling his ego is a common thread in Kanye’s lyrics. One particular track on TLOP paints a poignant picture of Mary and Joseph, placed in a modern setting.

I said baby what if you was clubbin’
Thuggin’, hustlin’ before you met your husband?
Then I said, “What if Mary was in the club
‘Fore she met Joseph around hella thugs?

This humanising of canonised figures like Mary and Joseph serves as a self-referential image regarding Kanye and Kim’s relationship. They are flawed humans, trying to make the best of their fame and family life. As a middle-aged man, the vibrant hope of youth on full display in albums like The College Dropout, and Late Registration seems to be a faded memory as Kanye explores his inner soul with sometimes troubling results.

As Kanye’s tumultuous 2017 and 2018 were put behind him, he managed to release the Wyoming series. He gets  intensively personal on ye and there are hints of a man at a loss of where to take his life and career. Battling mental health and public scrutiny seemed to have taken its toll, especially as he grappled with issues surrounding fatherhood too.

One of the most revealing lines is a couplet featured on the title track from the Kids See Ghosts EP:

Got a Bible by my bed, oh yes, I’m very Christian
Constantly repentin’, ’cause, yes, I never listen

This tension between trying to hold onto faith while living in a sinful world is a millennia-old theological problem. Kanye’s self-reflection shows him fully embracing matters of faith, but struggling like any other person would.

Throughout his career, Kanye’s music and lyrics show a subtle yet consistent concern with spiritual matters. The nature of those lyrics may vary, but the personal expression of struggles and triumphs along the way correlate with his walk in faith, all the way up to his most overtly Christian incarnation today (literally running church services).

Mapping some life-defining moments in his life allow us to understand how Kanye relates to his faith. His early material was free-spirited and humble. However, following his mother’s death, he understandably turned more introspective and became distant from God. This was followed closely by his VMAs incident with Taylor Swift, which triggered into his public persona morphing into that of a villain. It was during this time in which he was at his most defiant and displayed a mainly negative attitude towards God.

However, in the latter third of his career, as he settled into family life and earnest soul-searching, a much more positive attitude towards faith emerges. This period of soul-searching could even be said to have been doubly triggered by his Trump/MAGA period, followed by intense mental health issues as in the Wyoming period.

This timeline is shown below: In Christian jargon, a spiritual revival is a longed-for Godly movement in the culture. Right now, we are witnessing the spiritual revival of a titan in pop culture, Kanye West.  This new Kanye is more comfortable than ever to express his faith. From humble beginnings as a young producer making a name for himself, to his self-proclaimed godhood, to his troubled political years, to his present state as a father concerned for his kids and husband trying to serve his wife, Kanye’s timeline is as spiritually fascinating as it is illuminating as to how one’s faith can both inform and enhance one’s art and music.