On his 11th studio album, Music to be Murdered By, Eminem surprised fans and critics not just for the sneaky album release, but for the calibre of its rap qualities. Some fans even rejoiced that it was a return to prime Eminem, lyrical controversies included. On standout track “Darkness”, Eminem takes aim at gun control in the US, adopting the perspective of the 2017 Las Vegas shooter to highlight the darkness in these perpetrators’ minds, and the absurd frequency at which these events occur.

The song is built over a melancholy piano sample, playing the chords of “The Sound of Silence” by Simon & Garfunkel. Playing with the hook of that song, “Hello, darkness my old friend” emphasises the alienation and torment of individuals who turn to alcohol, drugs and violence to soothe their souls. The song’s lyrics are filled with puns regarding liquor shots, bullets and pills.

I keep pacin’ this room, Valium, then chase it with
booze
One little taste, it’ll do
Maybe I’ll take it and snooze, then tear up the stage in a few
(Hello, darkness, my old friend)
Fuck the Colt 45, I’ma need somethin’ stronger
If I pop any caps, it better be off of vodka
Round after round after round, I’m gettin’ loaded (Haha)
That’s a lot of shots, huh? (Double entendre)

Eminem is known for writing from the perspectives of killers and psychopaths for the sake of storytelling. However, on “Darkness” it isn’t just the exploration of the dark aspects of the human psyche that shocks, but also the crossing over into reality regarding mass shootings in the US.

Throughout the song, he uses a sustained metaphor comparing the killer’s guns and bullets to himself as an artist preparing for a performance onstage (also see lyrics above). It’s a tricky wordplay, which also highlights one of the biggest motivating factors for shooters – to achieve infamy and death in a blaze of glory.

Truth be told, the most shocking part of “Darkness” isn’t necessarily in the depiction of mass murder, but a line Em uses to highlight that this all happened within legal means in the US:

Finger on the trigger, but I’m a licensed owner
With no prior convictions, so law says sky’s the limit
So my supply’s infinite, strapped like I’m a soldier

The shooter owned more than 40 guns, which news outlets noted was perfectly within Nevada’s state laws on gun ownership. The staggering size of his arsenal found in the hotel room also boggles the mind.

In what reality does this seem even remotely normal? Eminem challenges audiences by saying, only in America.

The music video ends with a sombre image of Eminem in front of a wall of television screens. Overlapping audio of news stories reporting mass shootings in the US build to an overwhelming cacophony.

Around 9 or so unique stories can be identified in the voice clips (the very fact that we can’t tell exactly which news reports come from which shootings speaks volumes) From these stories alone, Eminem cites a total of 119 deaths and 509 wounded from mass shooting events.

The news stories cited, as they appear in order are:

As the video zooms out, the TVs can be seen to be assembled in the shape of the United States. The words ‘WHEN WILL IT END?’ appears, as Eminem walks offscreen. 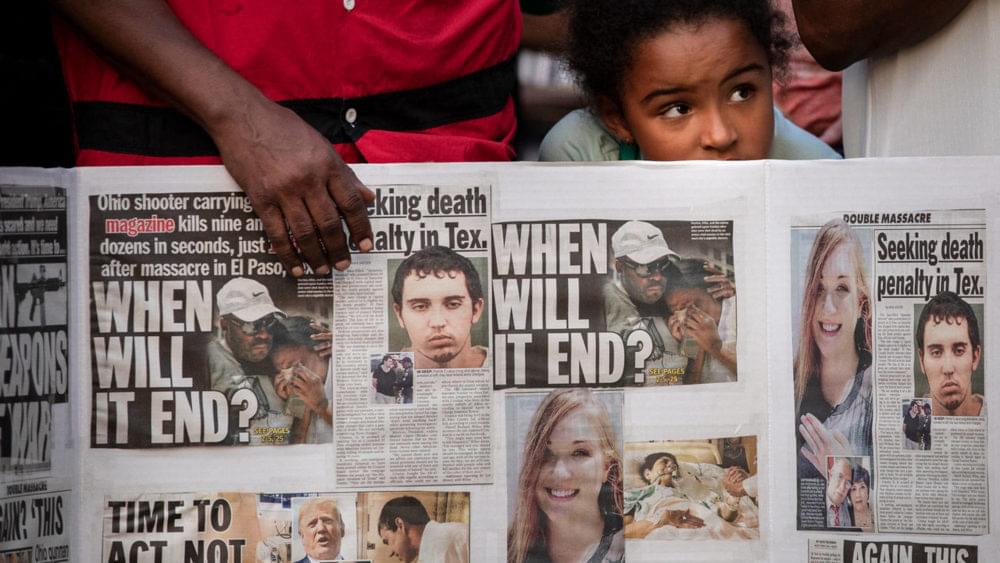 This is a recurring theme for a nation that struggles with gun violence moreso than any other in the developed world. The topic is also commonly memed in the same tone as this satire piece by The Onion: “‘No Way To Prevent This,’ Says Only Nation Where This Regularly Happens”.

It’s a hot political point for American conservatives, on the same level as abortion or gay marriage. Individual freedom is enshrined within the American psyche, and this of course includes their right to bear arms. However, with escalating mass shootings in recent years, including rapid-fire semi-automatic weapons, the debate seems to be yielding no solutions. If anything, things seem to be getting worse.

According to Giffords Law Center to Prevent Gun Violence, “6 of the deadliest mass shootings in modern US history have happened in the past decade”. It’s a strangely American phenomenon, as the rest of the world looks on in abject horror with each news report of yet another mass shooting.

A generation of children has grown up hiding under desks during active shooter drills. Americans of all ages have come to fear shootings at concerts, movie theaters, and churches. Firearms increasingly fuel hate- and bias-driven attacks. No other developed nation experiences mass shootings with the same terrifying frequency as the United States.

Some critics have highlighted Eminem’s hypocrisy, due to his propensity for violent lyrics. After all, he did introduce himself to the world in 1999 by declaring “Hi kids! Do you like violence?/Wanna see me stick nine inch nails, through each one of my eyelids?Wanna copy me and do exactly like I did?”. Furthermore, this album is literally called Music to be Murdered By.

Media outlets like the Washington Examiner also comment on Eminem’s three prior gun charges as futher evidence that he is a left-pandering, hypocrite not worthy of our time. However, these charges were from allegedly shooting a police car with a paintball gun when he was 20 years old, and another incident involving pistol whipping (with an unloaded gun) an assailant during an altercation. .

However, Eminem has never been one to flaunt firearms in real life, nor has he made a name by boasting about shooting up the streets of Detroit. In his personal and professional life, he has maintained a relatively clean record (it’s also worth noting that while Eminem still raps about popping pills and drinking alcohol, he celebrated a monumental 11 years of sobriety last year).

This line between rap lyrics and reality is a point consistently lost on conservative critics. It’s a luxury afforded to other literary or art forms, but rarely extended to artists such as Eminem. (It’s no accident that Eminem named this album after an Alfred Hitchcock project. Hitchcock also indulged in violent, shocking imagery for his time…yet is considered an auteur and cultural visionary).

This also isn’t the first time Eminem has referenced gun control. In these latter stages of his career, he seems less intent on offending, and more focussed on engaging in meaningful political issues. His fiery 2017 cipher “The Storm” took direct aim at Trump’s dangerous buffoonery:

It’s like we take a step forwards, then backwards
But this is his form of distraction
Plus, he gets an enormous reaction
When he attacks the NFL so we focus on that in–
–stead of talkin’ Puerto Rico or gun reform for Nevada
All these horrible tragedies and he’s bored and would rather
Cause a Twitter storm with the Packers

While on “Darkness”, he never directly names the Las Vegas shooter, there have been other times when Em has referenced shooters. On his standalone 2016 track “Campaign Speech”, he references high profile news stories such as the 2015 Charleston church shooting as well as Trayvon Martin’s murder in 2012.

I’m givin’ Daniel Pantaleo a refresher course
On excessive force and pressure points
And dressin’ George Zimmerman in a fluorescent orange
Dress and four inch heels to address the court
With a bullseye on his back, his whole chest and torso
Are left on the doorsteps of Trayvon’s dad as a present for him
And send Dylann Roof through the windshield of the Benz
Until he spins like a pinwheel and begins feelin’…
Like a windmiller with a thin build while his skin’s peelin’
And skids ’til he hits a cement pillar

This ‘woke’ version of Eminem rubbed some fans and critics the wrong way, with people telling him to stay in his lane. He’s even been accused of merely pandering to the left as a smart business move.

These criticisms didn’t fall on deaf ears, as Em raps on “Premonition (Intro)” the opening track of MMTBMB:

They said I’m lyrically amazing
But I have nothing to say
But then when I put out Revival and I had something to say
They said that they hated the awake me
I lose the rage, I’m too tame
I get it back, they say I’m too angry

And again on the heartfelt “Leaving Heaven”:

I told the woke me to go to sleep
But still, they keep on provoking me
They’re hoping to see me completely broken emotionally
But how in the fuck am I not supposed to be woke
When these fuckers just keep poking me? Now

The ultimate twist in fate is that Eminem on paper is a perfect symbol for rightwing ideals. When he burst onto the scene, he shook the music industry and harnessed the energy of angry white males eager for an anti-establishment figurehead.

“The violence and hate in Eminem’s music … is the soundtrack of our times,” says Bozza. “America is angry, poor, out of work, misunderstood and gunning for revenge, a country which has had it up to here and is ready to flush reason and act rashly.

That same anger runs in American blood today. An older, wiser Eminem however, chooses to redirect it to mirror the depravity and absurdity of an issue like gun control, much in the same way he provoked white suburbia all those years ago.

With Top 40 hits, party bangers, and in-depth storytelling, MTBMB is as diverse as Eminem’s whole career. On “Darkness”, he pauses to challenge audiences on a polarising issue. It’s symbolic of what he’s always done – not just confronting listeners with the darkness within killers’ psyches, but also the larger picture of a darkness tainting the soul of their nation.