The big news this past Halloween came unannounced, dressed all in black and heavy eyeliner. The champions of angsty 2000s alt culture were back. Seven years after their unceremonious end, New Jersey band of brothers My Chemical Romance rose from the grave. But why now? And why has it caught on like wildfire?

In this post, we take a brief look at the band’s history and legacy, and speak to the diehard fan who managed to livestream their reunion show in LA for more than 30,000 scene kids, old and new around the world.

When I was a young boy

Almost 20 years ago, aspiring comic book artist Gerard Way was interning at Cartoon Network. On one fateful, sunny September day, a world-shaking event would change his life and the music world forever.

After witnessing the horror of 9/11, Gerard said it felt like he was watching the world end. His cartooning work felt hollow, and he was compelled to pick up his guitar. He wrote the lyrics to “Skylines and Turnstiles”, setting the tone for what would become My Chemical Romance’s debut album I Brought You My Bullets, You Brought Me Your Love (2002).

And in this moment
We can’t close the lids, on burning eyes
Our memories blanket us
With friends we know, like fallout vapors

This album became a sleeper underground hit in the alt New Jersey scene, but quickly gained traction due to the exciting new platform MySpace. Gerard, Mikey, Ray and Frank were making a name for themselves. With the release of their sophomore album Three Cheers for Sweet Revenge in 2004, the band had no idea the cultural movement they were about to unleash.

They said all teenagers scare the living shit out of me

Those of us who grew up in the 2000s will clearly remember the aesthetic. Straightened fringes, red and black stripes, raccoon eyeliner, multiple studded belts and wristbands…the emo phenomenon was an early example in the new millennium of a subculture truly impacting the mainstream. But, just as MCR titled one of their songs on Three Cheers, their music was not a fashion statement, it was “a fucking deathwish”.

For all the hysterics and teenage melodrama, there was some element of truth to the emo movement. The news cycle was filled with stories of weapons of mass destruction, tsunamis, bird flu, hurricane Katrina, and the advent of an embryonic form of social media, it really did feel like the world was at a turning point for the worse.

It’s no wonder that an angry pale-faced kid in theatrical make-up screaming “I’m not okay!” has since become a symbol of that era.

Three Cheers was critically acclaimed, and sold more than 1 million copies in less than two years. Although 2000s era emo as a genre was much maligned for its theatrics, misogyny and navel-gazing, for a time, MCR were the biggest band in the world. Their next album release The Black Parade (2006) cemented that fact, and propelled them to pop culture icon status*.

They were growing up with their fanbase, and whether consciously or unconsciously, were guiding a whole generation through a time of mass social and political upheaval. As an old Tumblr fan post puts it (see below), each album effectively taught fans how to handle different stages of life. 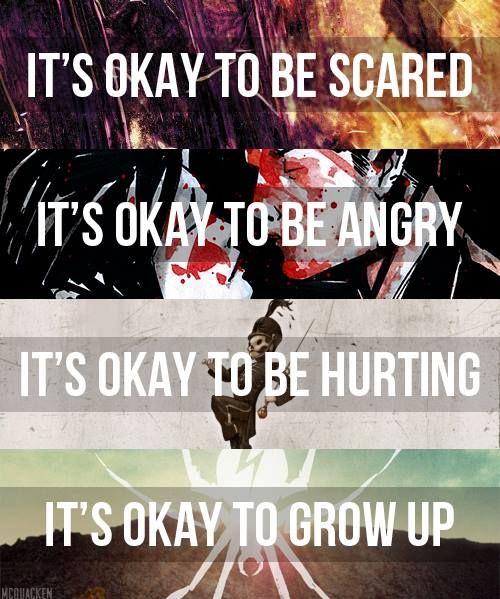 So long, and goodnight

Following their generation-defining Black Parade moment, a divisive and more upbeat alt rock record Danger Days (2011) would prove to be their last. With the literal introduction of a technicolour palette, and newfound commercial rock sensibilities, MCR had struck mainstream success. They had transformed from banshee-rock in leather to pop radio superstars.

However, due to internal tensions, the band decided to call an indefinite hiatus in 2013.

Besides some B-side projects and small releases, it seemed like the My Chemical Romance journey was at an end. It wasn’t until late 2019 that fans were shocked to hear of a Return.

On December 20th, the band reformed for a special reunion show in LA. While the Shrine Auditorium has an official capacity of 6,300, many thousands tuned into social media and livestreams. One particular livestreamer became a My Chem saviour that evening. Initially, @dietshampoo planned to livestream just a song or two, but she ended up streaming the whole show.

We spoke with @dietshampoo, real name Lauren Solski, about her experience at the Reunion show.

Introduce yourself! Who are you, where are you from, what do you do etc…

My name is Lauren Solski, but my online name is Diet Shampoo! I’m from Northern New Jersey and I’m a cosplayer/ YouTuber who really loves My Chemical Romance.

How long have you been an MCR fan? Had you ever seen them live before?

I’ve been an MCR fan since 2004! Since I was only 10 years old at that time I didn’t get to see them live until quite a few years layer. Before seeing them reunite at the Shrine, I was able to see them for the last show they played before they broke up – Bamboozle 2012 in Asbury Park, NJ**.

What does MCR mean to you? As a fan and as a cosplayer?

MCR means more to me than any other band out there. Three Cheers for Sweet Revenge really shaped me as a person growing up and I based so much of myself on just that album alone. I grew up as an emo kid – well, I still am an emo kid; and their music is/ was a huge influence on that. As a cosplay artist, I draw a lot of inspiration from MCR’s music, album art and looks they have done on stage or in photoshoots. I really love recreating or coming up with my own looks based on their work.

What was the mood like leading up to the concert?

Everyone was just so happy and hopeful. We’d all been looking forward to this reunion for years so naturally everyone was so excited.

What about inside the show ?

The crowd was intense! Everyone was singing along to every song; it was magical. I started out in the pit area but moved back by the end of the first song so that I would be able to continue livestreaming without being trampled lol.

What were your favourite songs they played live? Any hints of new material coming?

My favorite songs they played live that night were “I’m Not Okay”, “Na Na Na”, “Mama” and “Famous Last Words” – but honestly, every song on that setlist was incredible. I think there was a strong hint of new material coming with some of the imagery presented both on stage and off. All the new symbols that were posted online, along with a new patch on Gerard’s jacket point to a magic/ witchcraft theme.

Could you give an estimate of the average age of the crowd? I’m curious how many old school emo fans versus new ones there were.

I’d say the majority of the crowd was in their mid-twenties to mid-thirties? But there were also a good amount of new teenage fans there which was pretty cool because they were most likely seeing MCR for the first time.

If you could share one story from the concert experience, what would it be?

Something unique to my concert experience would be the livestream. While being fully immersed in the music I would glance at my phone every now and then to see how many people were watching. At one point it reached around 30k. I think that was the coolest thing for me. Not only was I able to experience the concert of my dreams – I got to share that experience thousands of people around the world in real time.

Lastly, how tired were your arms after streaming the whole show?

Amazingly, my arms didn’t hurt that bad! But my back was killing me lol

It’s no secret that My Chemical Romance fans are hardcore, calling themselves MCRmy. While Lauren was able to livestream for a whole legion of fans worldwide, another intrepid fan @jaythepenguin, took the time to cut together the entire concert from the best angles he could find.

Life is but a dream for the dead

Where to now? The sentiment of staring in the face of destruction, war and existential dread that triggered the founding of My Chemical Romance was echoed on their last record ten years later. Gerard sings on the single “The Only Hope For Me is You”:

Where, where will we stand?
When all the lights go out
Across these city streets
Where were you when
All of the embers fell
I still remember there
Covered in ash
Covered in glass
Covered in all my friends
I still think of the bombs they built

Themes of haunting, misery and terror are classic My Chemical Romance. Almost a decade later, this verse echoes the lyrics from “Skylines and Turnstiles” in an eerie way as Gerard looks back at his past.

The timing of this reunion is apt as a new generation of youth inherit a world that’s arguably much worse off than what Gerard Way looked to in 2001. He saw the downing of the twin towers, we see a rogue president losing his grip on reality. He saw the beginnings of social media, we are now born into a world of targeted advertising. He saw Al Gore’s documentary An Inconvenient Truth, we are now living it…

Although a new wave of artists such as Yungblud, Billie Eilish, The 1975 and Twenty One Pilots have carried the flame of emo themes and aesthetic, there is something reassuring about having veterans return to the scene. While emo as a scene was never really taken seriously, the advent of the new decade has many critics reconsidering its impact as a subculture. There is even a predicted resurgence in the scene, both as a meme (the RAWRing 20s), and as a legitimate new incarnation known as the eboy or egirl.

There is no official word on new MCR material yet (although as dietshampoo explained above, there were several clues and hints), but a number of international dates are adding fuel to the fire that MCR is back.

As their anthemic track “Welcome to the Black Parade” suggests, they were once young boys destined to grow up to save others. It would seem that the protagonist has switched shoes, and MCR now play the role of the father, leading a new generation into a world filled with the broken, the beaten, and the damned.

*Anecdotally, alternative scene kids these days revere MCR as the Beatles or Nirvana of their generation. Standing in the mosh pit and speaking to younger fans, it’s happened once or twice that they looked in awe as I said I went to the Black Parade tour in 2007.
**Gerard actually referenced this concert in his open letter to fans explaining the end of the band and his own personal struggle with that particular concert.

One thought on “The Legacy of My Chemical Romance”